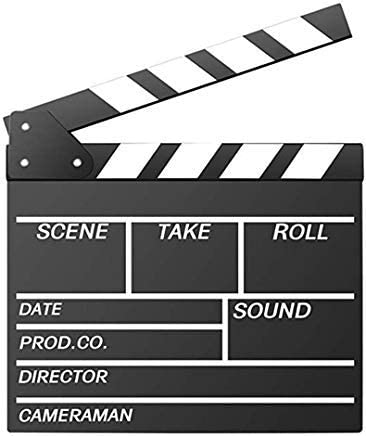 A clapper is a filmmaking device that is used mainly to mark specific scenes and takes, as well as assist in synchronizing the pictures and sound in a film being produced. This device is also referred to as clapboard, clapperboard, or slate board. There are two major components of a clapper: the slate and the clapstick. The slate held the information used to identify scenes and the clapstick was used to align sound with picture. During the early days of the film industry, one person holds the slate for the camera while another clapped the sticks together for synchronization. The two components were later combined into a single unit to make the job easier for just one person to handle. People who are unfamiliar with film work may think that this board is nothing more than a signage of sorts that identifies the current scene that is being shot. This is because most of us are used to the mechanism of the camcorder, which records video and sound on the same tape. Filming a movie is a totally different matter because the pictures and sounds are recorded independently of each other. This is where a clapper is needed.

The clapboard slate contains the date, title, director, and scene information (scene and take number, camera angle). The clapsticks provide specific audio markers, which are very important especially when multiple cameras are used in filming. The information on the slate helps the editing team identify which sound sequence should go with a particular shot and the markers provided by the sticks signal the exact moment that a take begins, thus making sound synchronization easier for scenes with multiple takes.

And while the slate board already contains the information as to which scene is being shot and what particular camera angle is being used, a verbal slate is also needed for audio purposes. A person states the scene and takes number to make it easier for the laboratory technician to identify the shot. This creates less confusion for the technician and ensures that the dailies are released on time.
The first clapperboard was made up of a wooden chalkboard with a hinged clapstick attached on top of it. With the passing of time, this has evolved into a pair of wooden sticks attached to the top of a whiteboard or acrylic glass slate. This later model of the clapboard was preferred because the information written on it was legible even without additional lighting.

The clapsticks themselves have undergone some modifications through the years. The original version had diagonal black and white stripes to make it clearly visible in any lighting condition. Lately, clapboards with colored stripes are also being used and some productions are even using digital versions in lieu of a real clapper.

The clapperboard has also kept abreast with modern technology with the advent of the electronic time code version. This is a digital slate where a time code is displayed on a large LED screen. This version of the movie slate generally no longer needs the clapper since the time code itself lets the editor know which scenes and shots go with which sound sequence. In the absence of a clapperboard, the sound in the film is wild. In this case, the lab technician will try to do rough synching for the rushes or simply provide a separate section of dailies for the audio. As you listen to the audio in this instance, you will only see a card saying “Wildtrack” on the film. The editing room then is where you can truly appreciate the value of that little blackboard thing with the sticks on top.